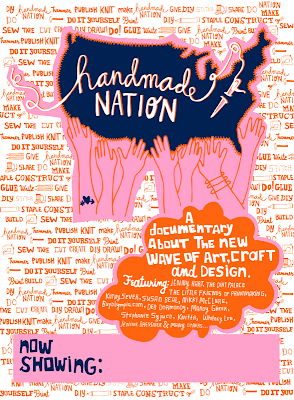 Wednesday night I saw the SF premiere of Faythe Levine's long anticipated craft documentary Handmade Nation: The Rise of DIY Art, Craft & Design, courtesy of SF360Film+Club. And I wasn't the only one. That place was PACKED. 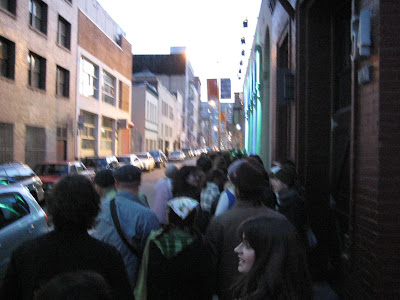 This film has been looong in the making, it seems, and it came out just under an hour, but nicely organized, with a catchy soundtrack and great opening/closing credit animation.

It opens with a great sequence of heavy-hitters in the craft world, the stars of Handmade Nation, talking about the cult of craft; they define, describe and depict their own relationships to making, and in doing explain why craft has come to be so important to the community of people doing it right now. This is the stuff that always gets me, the composite definitions people come up with for this seemingly innocuous pastime that are compelling and powerful reactions to modernity. As one such craft-lebrity, Sabrina Gschwandtner puts it, "Being a crafter is a way to slow down."

The film was fun to watch, looking for faces and spaces that you recognize, hearing familiar accounts of craft fair culture and learning more about companies you've seen on the circuit. It's a proud film, in a good way, because it takes it back to the more emotional roots of craft's new wave and effectively separates out the business of it all. It reminded me of the time back in college when my bestie Mary Wegmann and I fawned over issues of craft zines that we had to order in the mail and craft was so romantic and subversive and GOOD. 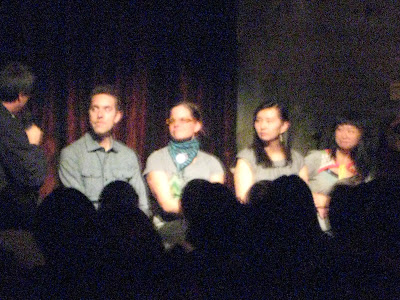 And now we all know craft is a little different, more money-making and less rough around the edges, but Handmade Nation really transports you back to that time when it was relatively new. Lots of the crafters show how they make their work, without much proprietary concern about other people copying them--craft in the beginning was after all, about sharing resources and getting as many people interested as possible in making things.

It's a celebration of a film, for sure, and poses great questions about the future of a movement that has reached critical mass in many ways. The same real, hard bound book deals, pattern and fabric lines for craft chain stores and craft fairs that trump malls for holiday shopping destinations, while signs of the movements success are also challenges to the very anti-corporate, d.i.y. roots of it all. Keeping with tradition, there were crafters set up vending things before and after the film itself: 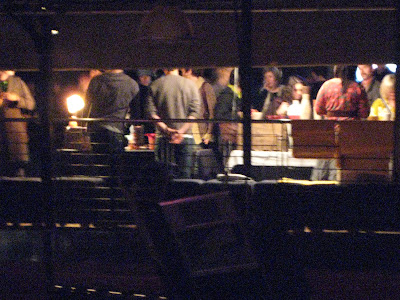 Faythe Levine wasn't there for the screening (which I thought was a real tragedy!) and so she wasn't available to discuss the questions she poses at the end of the film surrounding all these issues of cultural negotiation and the future. Many people see craft as a direct challenge to mass production and too, a challenge to capital itself. But when craft gets HUGE, crafters are faced with the same decisions as capitalists. And the collective decision the community makes in the next five years about whether to go big or go home, will be an important one. The movement has gotten big enough now that there are many conflicting ideas about what the future of craft will look like, and this film doesn't show that conflict as much as I would have expected. That's probably my only criticism. Though there was a fine panel after the screening, the panelists' discussion wasn't about the film specifically, but more about their experiences in the d.i.y. community. 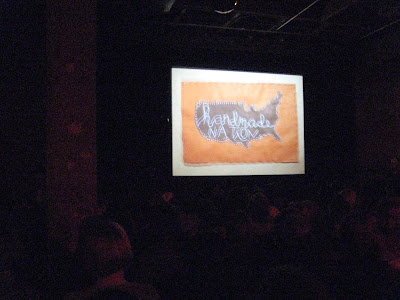 As a document of an historic movement, the film hit its mark. Sorry for the long post! But really, my heart just swelled watching it.
Written by Mary Casper around 12:00 PM