Hey, do you live in the UK? 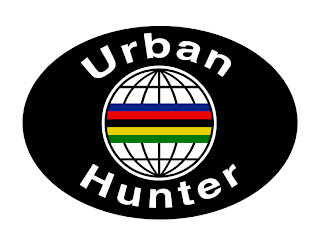 Then you should march on over to Urban Hunter and grab yourself a Fabric Horse Lock Holster. Urban Hunter will being carrying stock in these. Please contact Richard if you are interested in buying one or carrying these in your UK retail shop.
Written by Carrie Collins around 4:45 PM 1 comment:

Let me take a deep breath here. WHEW. Remember recently how I was talking about inventions? The gist was that when someone designs something really well, she should get to call herself an inventor. Well, kids, I'm just not sure this is one of those special times. Behold: 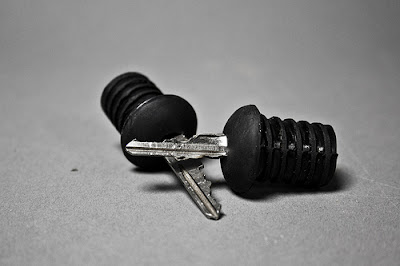 What's hilarious is that I KNEW this was destined for a Don't as soon as I read about it. I could almost read the Snob copy before it was written. It's just, I'm also a sympathetic sort of a person. And I don't like to be snotty, much.

But like I said, let me take a deep breath. For starters, pretty much anyone could make these with their bare hands, though this is only one of the reasons why I don't count this as any sort of invention. Take a dime-store house key, heat it over a flame, force it through one of those ugly plastic bar ends and you will have these ridiculous accessories, christened Biker's Revenge. The original pitch:

These modified handlebar plugs speak to the disgruntled urban cyclist. By retro-fitting stock parts with up-cycled keys, bikers can now find satisfaction with close encounters. This concept puts an new twist on the timeless tradition of car-keying revenge. by Matt Braun and Jared Delorenzo 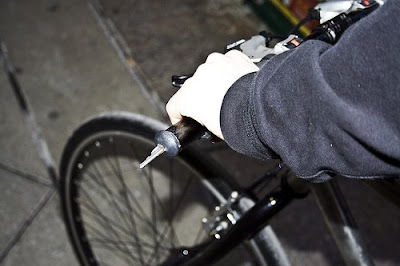 Upcycling?! In mere moments, you are now able to turn once lovely handlebars into scary, hideous weapons which could just as easily catch you in the thigh (or worse, the groin) in an otherwise gentle tumble over. The proof left out of this pudding is that bar plugs are meant mostly for drop bars...Which means you'd have keys pointed toward you on your bike. They'd still prevent core-sampling, but may take out both your knees instead. 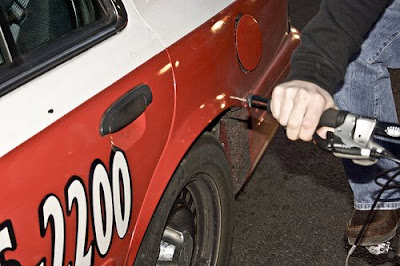 The real problem comes when you consider their alleged use. Have you ever tried to exert force out the end of your handlebars? From the standpoint of common sense physics, you may as well throw yourself under a bus. Only people particularly learned in the art of counterbalancing will emerge from such an encounter unscathed. A beloved friend of mine once kicked the mirror of a parked SUV only to F his bicycle so terribly he had to replace his wheelset. Yes, Oscar's was involved, but this friend was no freshman to the brew and no rookie on two wheels. I'm just glad that said friend had not employed the use of these death hooks. SCARY.

In sum, this is the most terrible thing I've ever heard of. I'm not even against it from a "destruction of property is no way to get cyclists an equal share of the road" perspective. And I'm not going to touch the dopey mountain bike featured in their relaxed-fit action shot. It's just the most ill-advised solution to any possibly scary situation. It demonstrates little to no comprehension of an urban cyclist's true experience riding in the city and perhaps most embarrassingly, they lack any aesthetic considerations. I know many fine products of Philly's UArts, but I'm sorry Jared and Matt, I'm afraid you should head back to the drawing board. Not just that, but sell that Giant and buy a bus pass. Your Wallabees would be a lot comfier and we'd all feel quite a bit safer.
Written by Mary Casper around 10:19 PM 1 comment: 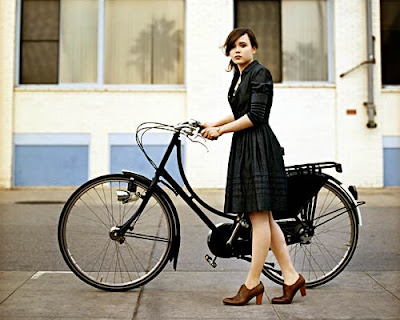 Since it's not like any of us have money to burn right now, here is a thing that is not really available for purchase but is so ingenious that its lighting up the blogosphere, literally. It's a little funny to be singing the praises of a thing that doesn't actually seem to yet exist, much like lauding the concept of a teleporter. But I'm not the only one. It's such a good idea that it seems to elevate the designers who came up with it to the more esteemed distinction of Inventor.

So what is it? Drumroll please...a bike light that creates a Bike Lane all around you as you ride. So say you're living under the iron curtain of a certain injunction? Take matters into your own hands! Have trouble with pesky vehicles crowding your god-given right to the road? Show them, with lights, who's boss. And since the lane travels with you, no more bike lanes that mysteriously merge into automobile traffic or disappear altogether. 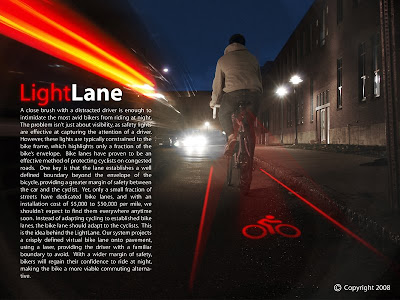 Dubbed the Light Lane, the laser-lane guarantee hints at very great possibilities in advocating cycle commuting. It's a little guerrilla, a little techie and a little imagination. Magnifique!
Written by Mary Casper around 4:08 PM No comments: 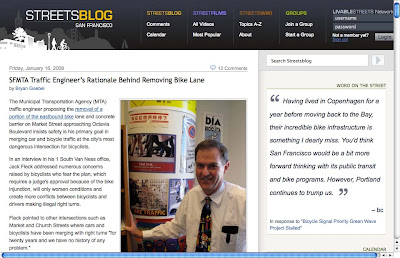 For the latest in policy debate, shifts in traffic patterns and urban planning, the Livable Streets Network is a great web resource. Their more well known ventures, Streetsblog together with the sister site, Streetfilms, has been improving the quality of urban living for years now by circulating valuable information about the plight of urban cycling and transportation issues. Their influence now gets them interviews with the likes of NYC's DOT Commissioner Janette Sadik-Khan and their films have proven influential in proving to policymakers that changes to car-centric urban planning must happen SOON. They've just launched the most recent locality for the blogging network in San Francisco. Hopefully Streetsblog SF up to code so that the actual climate for cycling in the city can support the avid community of cyclists already in place. Coincidentally, there is a Streetfilms screening tonight in Philadelphia at the Academy of Natural Sciences: an hour of films showcasing bike-sharing programs with all three Streetfilms master documentarians in attendance and available for a Q&A following the screening. Starts at 6:30.
Written by Mary Casper around 4:31 PM No comments: 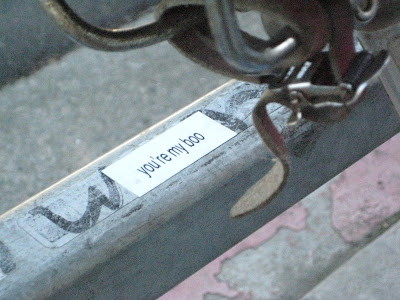 Spotted: on a bike rack in front of a Favorite Hardware Store.
Written by Mary Casper around 3:40 PM No comments:

Stumbled across this piece by filmmaker Matt McCormick and narrated by the now famous Miranda July from 2001. It seems to straddle the distinction between ironic and critical documentary film, as I find myself both amused and interested at the same time. The short film entitled "The Subconscious Art of Graffiti Removal" contends that graffiti removers are artists themselves, creating public works sometimes unknowingly that accomplish much the complexity and well, simplicity of many of the Abstract Expressionists. The film seems to have earned both praise and criticism, both flung widely across demographics including graffiti artists themselves and bystanders alike.


the subconscious art of graffiti removal (excerpt) from matt mccormick on Vimeo.

It won all kinds of awards back in 01, though despite my appreciation of Miranda July and her kindreds, I've never seen this. Have you? Any thoughts about whether this is genius or rubbish? It poses some interesting questions about the urban medium which is so prone to attracting contradictions; in fact, the film does a superb job of mirroring the nature of graffiti itself. I'm not sold on the idea of graffiti removal equalling the original artists' work in aesthetics or historical relevance, but it is an interesting spin on the issue. It suggests there may be some value in those mundane, neutral splotches increasingly clouding the surfaces of our cities, which is a rather optimistic scenario. I am one for optimism...but...still...
Written by Mary Casper around 11:14 AM 1 comment:

With that dusty old tree that's now starting to drop needles like a clumsy junkie? Good thing you asked. Seems that the Philadelphia Pedal Co-Op has you covered. For One Measly Dollar per foot of height, your beloved tannenbaum can be carried with dignity to the local composting receptacle instead of the trash heap. Apparently the City of Philadelphia will landfill all those poor trees left by the roadside, which leaves you with only two alternatives: email Woody from the coop [pedalcoop@gmail.com] or take the tree yourself to the Streets Department Sanitation Convenience Center. 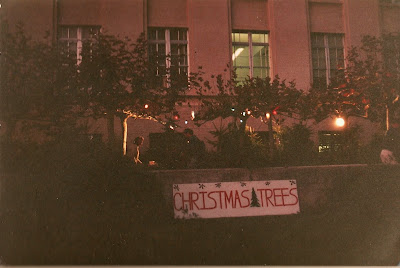 If you skipped the tree this year in the interest of environmentalism or say, Hannukah, you could also rally up some of those curb-ridden trees and do some recycling of your own. For one, you could make a forest installation in your living room like some people. See, it's really up to you.
Written by Mary Casper around 7:00 AM 1 comment:

These are a little tardy, but hey, maybe you're just now picking up the September 2008 issue of XLR8R magazine and saying "Hey! Isn't that....?!" And we're just here to pat your hand, reassure you by saying, "Why, yes. Yes, it is." So don't strain your eyes to read that fine print, you were right. 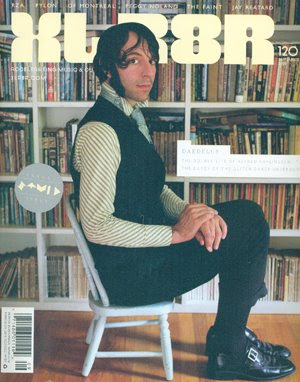 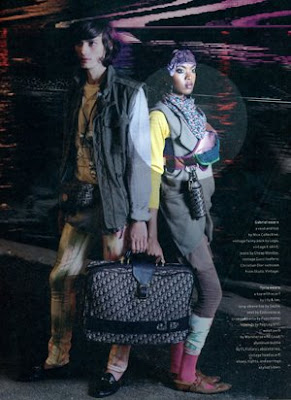 Written by Mary Casper around 11:26 PM No comments:

You're probably pooped out from celebrating, but our pals at Magick Outlaw have a show of their incredible and I'll say it, zany, screen prints going up at the Art In The Age space in Old City tonight. This is the very same Magick Outlaw that's behind those fancy 59ers you've been drooling over. The show will probably be brighter, crazier and better than any other opening you've ever been to, so it would be worth crawling out of your post-holiday cave for. Mr. Pete Whitney writes, "Me and Joel and possibly even Don Vincent Ortega are gonna stop by there this Friday night the 2nd if you, like, want an autograph or something." So, there you have it. 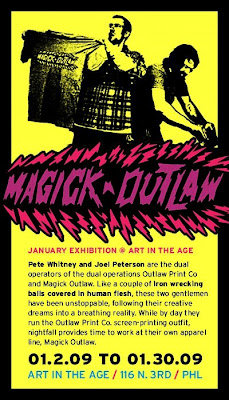 Other exciting things out of Outlaw this holiday season include some sweet cycle relevant prints by print assistant Don Vincent Ortega, dear Philadelphia collectibles and a new shirt design that may remind you of someone you know.
Written by Mary Casper around 1:28 PM No comments: 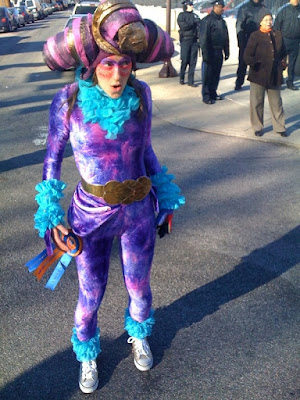 Mummers 2009 featuring Carrie Collins you all.
Written by Mary Casper around 9:19 PM No comments: